Born in Vienna in 1965, Eva Flatscher studied free
nd applied painting at the School of Arts. Since 1992,
e has worked as a freelance visual artist. In 2002 she
ought the concept of Light Painting to the public realm,
nd since then she has practiced her art in concert halls,
international festivals, and in public venues both in Eu-
pe and in the United States. With Light Painting, the
ustrian performer unites the art forms of music, painting,
nd dance in a unique and electrifying manner. As dan-
ers move on the stage and music sounds, she directs
em both, the musicians and the dancers, through her
ainting. In this way, she seeks not to produce a backdrop
the stage but to bring her painting together on the same
vel with the other art forms.
chnical Requirements
Rather than painting in a conventional manner, Ms.
atscher trades in her brush and canvas for an A1 graphic
blet and plotter pen in order to transform her art into
omething dynamic. Her simple setup also includes a lap-
p, the software program Adobe Photoshop®, and one
more multimedia projectors. Her medium during the
erformance is light. With these implements she paints
efore the audience’s eyes, without following a pre-deter-
mined design. The painting is projected right on the stage
as it takes shape during the performance.
The Concept behind Light Painting
Eva Flatscher conceives of her work, which develops
live on stage through improvisation, as a narrative activi-
ty, in which the lines that she paints carry the story for-
ward. The narrative is reflected in the music and also in the
dance. For the musicians, what carries the energy is not
line, but tone. For the dancers, it is movement.
In this way, all of the art forms that Eva Flatscher
places side by side in her performances have a narrative
function. By ‘listening’ to one another through movement,
tone, and line, the performers seek to create a dramatic
arc that tells the audience a tale.
Through the dancers, Flatscher’s work becomes
three dimensional. They serve as solid, figurative elements
in the abstract work of art. During the performance, the
layers of painting, music, and dance interpenetrate. Each
art form reacts to the others and influences them as well.
Eva Flatscher establishes anchor points for the ‘plot-line’
of the story that is to be told. The gaps between these
points are then filled through free improvisation. Their mu-
tual interaction forces the artists to move out of their cus-
tomary environments and to engage with what is foreign.
This appears to be an interesting challenge, particularly
for the musicians. While under ‘normal conditions’ musi-
cians improvise by listening to one another play, in Light
Painting they must react to movement and color.
When the performance is over, Eva Flatscher captures
the work of art that has been created. Although the dance
comes to a standstill and the music fades, she converts
the resulting images into a series of paintings.
Music and Dance 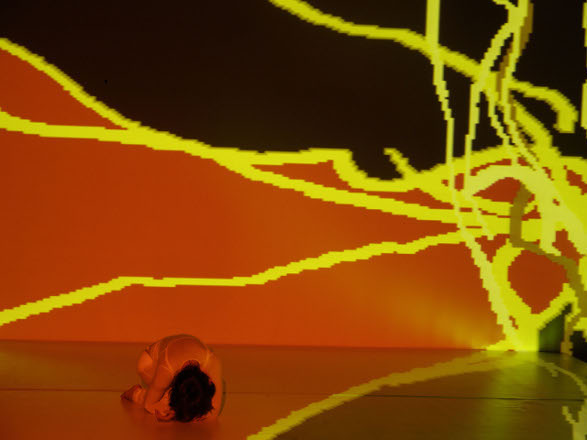